Funny thing about starting a rowing blog and then…not being able to row. Every year I have my Annual Spring Injury. No matter what I do or don’t do, at some point during the spring, I have an injury or some kind of interesting event that takes me out for a while. So far, I have managed to get back in the game early enough to do some summer races and then train for the fall head season, which is what I live for (for the non-rowers, head races are longer, 3 miles or so, while “sprints” are 1k or 2k, on a buoyed course, with a starting line and finish line). 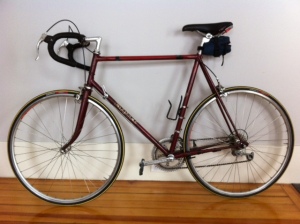 Lance Armstrong’s book was entitled “It’s Not About The Bike.” Well, for me, for the time being, it’s going to be all about the bike. I went on my first ride the other night, going 23 miles to Lincoln and back via Trapelo Road. I had forgotten just how many steep hills there are from Cambridge to Lincoln on that route, but you know what? I friggin loved it. I may have to buckle down and get a new road bike this year, though I have a strong sentimental attachment to my 35-year-old Eisentraut Limited bike, which was a pretty elite racing bike when it was made in 1977 and still rides nicely (Albert Eisentraut was a well known frame maker based in Oakland in the 70s and 80s, and I bought the bike from the brother of a good friend of mine, Stewart Hilliard).

So I start PT on Monday and will hope for the best. I had this thing all year last year, but it wasn’t too bad. I iced it and just rowed through it. Then after the Head of the Charles last fall, I entered into a life of serious laziness, which I often do during the winter months, choosing to exercise only a few times a week. It was even worse this year, as I had lost my job and was no longer on a regular schedule. For most of my athlete buddies, this would have meant working out like 4-6 hours a day, but not me. Nope, I see a window of opportunity to be a complete slug, and I jump all over it. The benefit was that, after a few months of doing very little, the pain in my elbow was completely gone. I couldn’t believe it, and I was gearing myself up for the first Spring Season Without Injury.

But alas, it was not to be. I went to Colorado in February for my mom’s 82nd birthday and got a little too cocky. I lifted weights in the hotel gym and did some dumbell curls, only to realize afterwords that I was the real dumbell. Then I went skiing at Snowmass and woke up the next day feeling massive pain in my arm. I think it was the combination of those two events, but probably the weights – I can’t see how skiing can mess up your elbow.

I returned to amazing weather here in Boston in late February and went for a wonderful 9-mile row. Except it wasn’t that wonderful, because my arm was killing me after – it actually started hurting about six miles in.

So it’s back to the bike, rehab, and lots of hopes & prayers. It could be worse – last year I was almost killed when I had a head-on collision with a Boston College varsity women’s eight, doing 3-minute pieces at full pressure and high ratings. I was up past CRI, where the Newton Yacht Club stands opposite a massive sand bar, allowing only a small channel in which to pass. I was looking into the sunset going upstream and, in so doing, turned around often to make sure no one was coming (knowing the dangers). I saw nothing, and I had polarized sunglasses on, so I would have seen a boat coming even with the glare. But there is a slight bend in the river as you approach the yacht club channel. After 5-10 strokes or so, I turned around again and there were two eights, going full blast, with a coach behind them. They were doing 3-minute pieces at high rating and full pressure, upping the rating during the pieces. The two eights were side by side and the one toward the middle of the river was coming directly at me. I would guess it was maybe 20 feet away. I’m not sure, but it was clear there would be a crash. I screamed in panic, “hold water,” but to no avail. 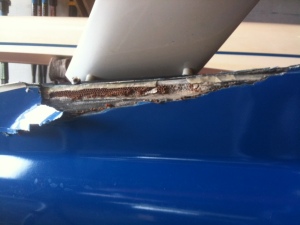 They were hauling ass and there was no way the cox could have heard me. I had just enough time to take one hard stroke with my starboard oar and then another quick short stroke with both. Just as I was doing that second short stroke, WHAM!!! the eight hit my boat at an angle, just about where my foot stretchers are. Busted the Van Dusen wing rigger in half, tore the gunnel up pretty badly, and sent me into the river, which was cold but only thigh-deep, as I was on the sandbar. 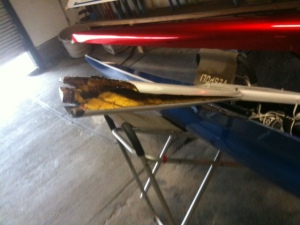 It was all fixed and I was not seriously hurt, but… that was my training-delaying experience last spring. I can’t help but relive the experience from time to time – had I not turned around, that eight would have gone right through my back, and I’m not sure what the consequences of that would have been, except to say, not good. Maybe having a little tendonitis isn’t so bad by comparison?